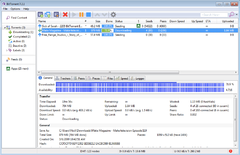 BitTorrent is the main client of the peer-to-peer (P2P) system. These systems are among the oldest and most popular ways to share files online. Essentially, it’s a network of users whose computers act as both a server and client at the same time, sharing thousands of files between them.

What makes BitTorrent different and so much faster than other P2P programs is the ability to download the desired file from multiple servers at once. It used to be that you could only get it from one user at a time, but now you can access multiple users’ computers to download the file faster than ever.

Just as an example, if you’re looking for a particular song, and you use an older program, you might find ten users that are sharing that song, but you can only download from one of them. With BitTorrent, you can download from all ten at once and basically get that song on your PC ten times faster.

BitTorrent also allows you to download several files at the same time and in turn, share them with other users who might be looking for them. The latest version has minor improvements to download speed and performance.